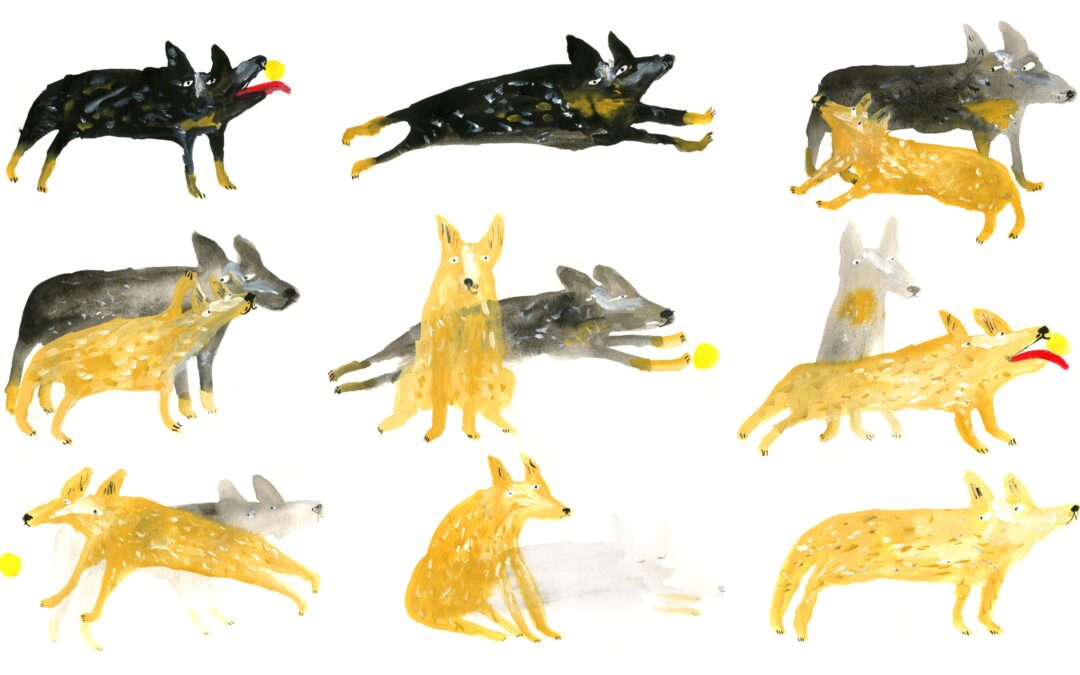 I found this article very heartwarming. I’m one of those that this applies to. Losing a dog is a devastating experience something that all pet lovers fear but eventually will face. I hope you like it.

About a year ago, a friend of mine came to visit me in Nevada City, California. We were at the height of our short, colorful autumn, and we went walking with my dog, Merle, among the blazing oaks and aspens. As we crossed Deer Creek on the Pine Street Bridge, moving from the quieter part of town to the more bustling, touristy section, I said, “It’s too bad Merle isn’t younger because otherwise she could show you the trick where she runs over the bridge.”

“What’s the trick?” my friend asked.

“Merle and I arrive together at one end of the bridge. I take her off leash and tell her to sit and stay. Then I walk all the way to the other end and shout, “O.K., Merle!” and she takes off like a shot and runs to meet me. She doesn’t take off until I say she can.”

My friend said it sounded really cool, but perhaps not like a trick.

“I wish you could have seen her in her prime,” I said. My friend said that yes, although he had seen at least fifty Instagram posts of Merle running fast when she was younger, it was sad he would not see the not-really-a-bridge-trick.

Merle looked anxious. To anthropomorphize is a stupid practice, but, still, allow me to indulge in the feeling that her eyes, at that moment, were saying, “I am sad that I am going to die soon.” Her health had recently taken a sharp downward turn. Arthritis was the most noticeable sign.

For a few quiet moments, my friend watched Merle and her old-cowboy gait. “You need a bridge dog,” he finally said.

“Oh, Merle is still a bridge dog, I assure you.” I said. “She still loves to walk over the bridge, even if she can’t run.”

“That’s not what I mean by ‘bridge dog,’ ” he said, gingerly. “What I mean is a dog that you get—well, not necessarily soon, but also not not soon, I guess? A bridge dog is a dog that will be around when Merle—when she is—you know! No longer with us.”

It was Merle’s turn to watch my friend. She sniffed the air around him, then looked at me as if to say, “Who is this joker?”

I Googled “bridge dog.” I didn’t find anything about it as a saying, but I found quite a lot about some bridge in Scotland that dogs leap from to commit suicide. I didn’t click.

About ten years ago, the relationship I was in fell apart, partly because my boyfriend cheated on me, but mostly because he had never liked me in the first place. My career had dead-ended. I was forty-one and making minimum wage working as a teaching assistant at a middle school where the students often shouted at me, “Why should we listen to you? You drive a Yaris!”

How had my life amounted to so little, I often wondered, when I wasn’t freaking out about how it was too late and I was too old to fix it. All of my friends lived somewhere else. Sometimes I would wake up in the middle of the night wondering what would become of me; sometimes, out of nowhere, my face would start burning with shame. I didn’t have the courage to go full-on Scotland-bridge dog, but I was toying with the idea, and if it hadn’t been for my parents, I might have done it.

The school where I worked was adjacent to a forest. Once a month, a stooped, white-haired, hard-of-hearing tree expert named Don took the kids into this forest and talked about it with passionate abstraction while they hissed homophobic slurs at one another. Don was a blowhard, and about one in ten of his crass jokes were funny. His best feature was his beautiful blue heeler, a compact, pleasantly aloof, short-haired dog. (They’re sometimes called Australian cattle dogs, or Queenslands, because they came into being when ranchers bred collies with dingoes for greater stamina.) Don’s dog was trim and agile, with a sweet, short-snouted face; she moved only at Don’s command, every step infused with a sense of joy and gratitude in being of service. “Get ’em, girl,” Don would say if the kids wandered away, and she would bound off, barking when she found them. If Don wanted the dog to come back, he only had to whistle; seconds later, she would be at his side.